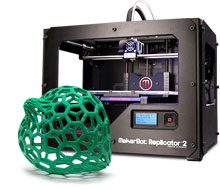 You’ve heard it again and again: manufacturing is dead in America. What once made us a great nation has either moved offshore or rusted away. And with that wide-ranging loss in productive capacity, our national economy began its long, painful, sad descent…

At least it seemed that way to a lot of folks.

In reality, a new manufacturing paradigm is emerging; we are now at the very earliest stages of it. It’s an exciting time: essentially, the equivalent of being present and engaged when the information age took root in the early 1980’s. Very few of us could envision what would evolve from the development of the first (crude) personal computers, the fledgling Internet, and later, the ubiquity of mobile devices, smartphones, tablets, etc.

But what if, back then, you could have foreseen the remarkable transformations these technologies created in society, education, and commerce? Imagine you could have made smart business and investment decisions based on what was yet to come. I was there in those early days. But, like most, I missed out on some incredible ground floor opportunities. Well, there’s a new opportunity on the horizon and I’m going to pay much closer attention this time. This next technological wave has the potential to be far larger than the computing/communication/information revolution that preceded it. Here’s why: the last one was all about electrons. Now it’s about atoms.

Not to downplay what’s happened already, but as great as it all is — accessing information, communicating, designing, solving problems, and advancing knowledge — the “output” of this activity is still trapped in a largely analog “last century” world. We all love our screens and being connected through them, but we live in a world of diverse physical stuff: everything we touch or buy in a store or get delivered in a box. The economy of producing and distributing all that stuff is at least five times larger than all the e-commerce websites, media, and online this or that. The total global market for “manufacturing” and delivering electrons is estimated to be $20 trillion whereas “hard” manufacturing and delivery of atoms is $130 trillion worldwide. Nonetheless, as we’re constantly reminded, the U.S. continues to lose manufacturing jobs overseas. There are multiple reasons for this and I’m not going to digress on those topics, except to mention that the coming revolution will radically democratize the means of production and enable local (and hyper-local) manufacture of goods on a massive scale.

For a glimpse of what lies ahead, think about what the laser printer originally did for the graphic design profession. Rather than having to rely on a team of production technicians to render the designer’s artwork, suddenly, it was only necessary to hit PRINT and a camera-ready master would emerge from the printer. Today, it’s possible for a product designer to create an intricate three-dimensional solid model in a CAD system and likewise press PRINT. This time, however, what emerges is not a sheet of paper but a fully-formed 3D object. Small 3D printers that connect to a personal computer are now available for less than $1,000. This solid print-on-demand technology was everywhere at Maker Faire. At least a hundred exhibitors were either demonstrating machines for sale or using them to create and display one-of-a-kind objects.

Here’s the basic concept: 3D printing is mostly an additive process in which an object is built up, layer by layer, as opposed to a subtractive process where you start with a block of material and your machine tool (typically, a lathe, milling machine, or cutter/grinder) removes the parts you don’t want. The vast majority of desktop 3D printers operate by melting ABS or PLA plastic and extruding it through a computer-controlled nozzle. Some have described this as a “hot melt glue gun on steroids” but that’s not entirely fair. ABS and PLA happen to be excellent, non-toxic plastics and are quite strong. Lots of cool and useful things can be directly created this way, and locally “manufactured” in small quantities. But the real power comes when a designer/inventor presses the MANUFACTURE button (instead of PRINT).

Watch this 3-minute video and you’ll understand nearly everything important there is to know: 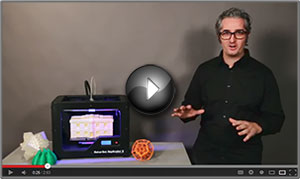 Because the design language of 3D modeling is often standardized (for example, the .STL stereolithography file format), the same program that drives a MakerBot-type printer can also drive a large “industrial strength” 3D printer or fabrication device, which can be located across town or somewhere across the world. This enables an artisan/inventor to prototype a design, “road test” it, and then find an outsourced manufacturer through a marketplace like Alibaba in China or MFG.com for U.S. manufacturing.

But not everything should be manufactured in mass quantities. If you look at the limited edition wares available on Etsy, part of the great appeal lies in their bespoke, “anti-Walmart” qualities. This trend to “small batch” sourcing will accelerate way beyond the confines of niche sites and crafter marketplaces like Etsy. Many entrepreneurs have found that they can bypass conventional funding sources and get all the startup capital they need from a Kickstarter campaign and produce initial batches within in weeks or days using rapid 3D production methods, then transition to conventional manufacturing as volume grows.

Chris Anderson published a simple example of scaling up in his fabulous new book Makers (Crown Business Press, 2012). Imagine you have designed a new, edgy kind of rubber duckie. To get it manufactured the conventional way, you’d need to invest at least $10,000 in tooling for an injection mold. After that, your cost per unit is tiny, just twenty cents each. With 3D printing, there’s zero tooling investment, but the per-unit cost is much higher: $20/each. As this plot shows, there’s a definite breakpoint:

If all you’ll ever sell is some number less than 500 duckies, it’s more economical (on paper) to go the printed route. Above that, advantage: injection molding.

Another place to visit to get an idea of what people are creating and selling right now is Shapeways. Shapeways is a combination service bureau and marketplace. If you want to get into 3D printing but don’t want to buy and operate a MakerBot or other printer of your own, Shapeways will print your creation for you. Because they own very high end printing equipment, the finished quality will be better and you’ll have a much wider choice of materials and finishes including jewelry-grade sterling silver. The service will also guide you to select the right material for your project based on price, detail level, strength, and surface finish. Then they’ll help you sell it! On the Marketplace side, Shapeways offers a very interesting assortment of items for sale including lots of art pieces, iPhone cases, gadgets, a mini branding iron that fits on a Bic lighter, jewelry, fashion items from ThreeForm, the Inception movie spinning top, custom shirt buttons, and of course, much more. All are print-on-demand, so you can often choose color and material (at varying prices). Fun to poke around and catch a peek at what the future of shopping looks like. Also well worth a visit is Quirky. Quirky showcases some extraordinarily clever inventions. Many were created to solve a personal frustration and went on to become commercial successes, like the Plug Out. Several have even been featured as my Cool Things of the Month. 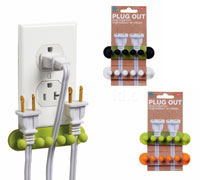 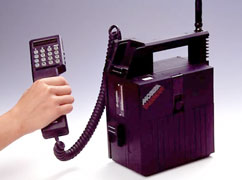 As nifty as all of this is, with current technology, the items available today are relatively small and functionally simplistic (although they can be quite geometrically complex). 3D printed items can’t yet easily include electronics for example. But you have to see where it’s all going. Judging this to be a silly niche endeavor is like seeing the Nokia Mobira Senator “portable” phone for the first time in 1982 and thinking the idea of mobile communications will never catch on. By the way, the Mobira cost over $5,000 (about $25,000 in today’s dollars), and weighed 21 pounds.

For more reference points, check this Honeywell ad from 1977 with the headline: “What the heck is Electronic Mail” or one from Apple in the following year asking the bizarre question, “What Kind of Man Owns His Own Computer?” 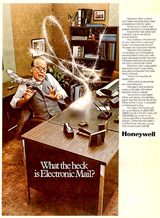 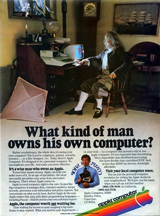 The whole concept of “print on demand” will undoubtedly expand far beyond what we can imagine today. Whole industries will likely be transformed in the process. At Maker Faire I saw this: 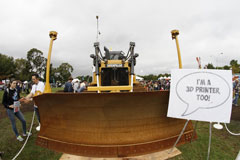 It’s a massive Caterpillar D6 bulldozer fitted with twin GPS receivers and automatic controls. A complex computer-generated 3D terrain model can be uploaded and the dozer will “print it” out of an empty dirt lot, to centimeter accuracy. 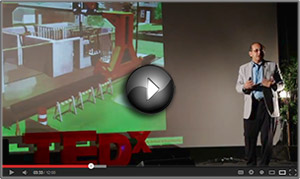 More cleverness to be found at Maker Faire NYC included the DIWire Bender from Pensa. It’s an open source automated wire bender that creates “3D lines in space” and has the potential to form virtually any open shape object from spools of metal wire. They had some great chair designs for example. 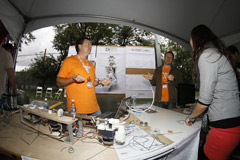 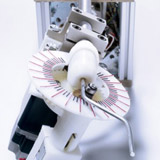 Three Form Fashion is a progressive design company that uses 3D imaging and scanning equipment to measure your body and then creates one-off customized apparel and futuristic fashion accessories. (I’ve learned that just because I personally wouldn’t do or buy or wear something myself doesn’t mean it isn’t a really great idea):

The rock stars of Maker Faire were undoubtedly Bre Pettis, a co-founder and the CEO of MakerBot, and Chris Anderson, founder and Chairman of 3D Robotics and former editor of Wired Magazine. They teamed up to deliver an outstanding talk in the way-overpacked Hall of Science. It was beyond standing room only. Clearly, something important is brewing. People are incredibly eager to learn and profit from all the great ideas being shared so openly.

I’ll pick this up next month on a slightly different tangent, and show you a great new way to capture and share knowledge. Here’s a hint: 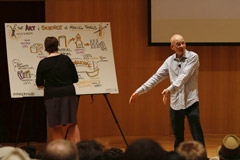 “I am the original developer of the Optimized Business Transition method, a holistic approach to exit planning which incorporates in-depth analysis, enterprise value maximization, transfer tax minimization, and forward-looking exit strategies. I have extensive experience in structuring ESOPs and buyouts, and have expertise in a broad range of alternative exit planning methods.”

Founder of multiple of startups, and nurturer to many more, Bill Gross was curious why some startups succeeded and others failed. So he gathered data and researched hundreds of organizations, including his own, and ranked each using five key factors. Gross found one key factor that stood out from all the other reasons why startups succeed. His finding surprised us all,…

Every once in a while, a sense of unease comes over me as if I have become untethered and feeling adrift from what I know. Not to be confused with the near euphoria I feel when I embark on an adventure into some unknown, this feeling of being detached is somewhat cold and comes with…

3 Powerful Questions that will Quickly Unleash the Extraordinary and Profitable Leader in You! 1.  Do You Really Understand What Is Really Important? When a leader can truthfully and accurately answer this critically important question, the power of the 80/20 Principle can then be tapped and exploited to motivate the type of behaviors that will…

Life is a never-ending stream of decisions.  From the moment we wake up in the morning to the time we go to sleep, we are making decisions.  Even the very act of waking up and going to sleep is a decision.  After all, we don’t have to wake up or go to sleep; we make…

We have all changed someone’s life — usually without even realizing it. Leadership educator Drew Dudley goes on to promote the concept that leadership is not a rare quality belonging only to a select few. Dudley dedicates his time and efforts to helping people harness the leadership skills within themselves. In this amusing TED Talk…